February 12, 2017
I opened up my WP blog, here , which I've had for years.  Will be posting there from now on.
Post a Comment
Read more

September 05, 2016
Never name a character Lloyd because for every time you type that name, you will type every variation but the correct spelling.  I've never backspaced so much in my life.
Post a Comment
Read more 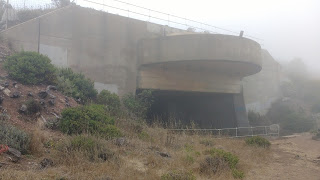 We went to the Bay area this summer and we found this turret in the Marin Headlands.  I knew I had to be inspired by this place, because it was super cool.  I finally figured out how to use in it a story I've been stuck on for like two years.  Score.
Post a Comment
Read more
July 29, 2016
::taps microphone:: Well, hello there. I've been busy this summer sending out submissions,  writing a query letter, and organizing the upcoming poetry club at the elementary school I work at.  And so many revisions.  On so many things.  Plus more on the newer-ish novel. I've got four submissions out right now, a slew of poems which would be um... ::counts:: 10, and a short story. I just hope that the eventual rejection letters don't all come on the same day.  That would be kind.  Of no one's doing though but mine.  Heh. So query letters.  They are a thing that may need more revision than the actual novel.  Which also still needs some cleaning up, but I decided years ago that it would be a forever project.  So I don't worry. I'm also contemplating in a very small way, asking people to read it.  Can you imagine the gall in that!?  LOL   Only a very tiny part of me feels that way. Thanks for reading!
Post a Comment
Read more

November 15, 2015
Now that I have a phone I can trust, (shout out to Moto G!) I've started adding submission nsuggestions to my calendar, so I don't forget about them, and also so I don't need to keep 10 tabs open on my computer. I've been plugging away at adding the edits to the 5th draft of the novel.  I'm coming to the conclusion that there has to be an end point on this somewhere, though I don't know where that point is.  I keep finding things to fix, some absolutely needed and others my preference. The weekend "creative" group at my school has kept me on task.  Plus it's a nice social situation. Plug plug.....
Post a Comment
Read more

I just watched the 10 version of this, and now I'm saving this to watch later.  REALLY good.
Post a Comment
Read more
More posts

vmh
I try to write. I put some of it here.